A BRIEF HISTORY OF BRICK TOWNSHIP

Before there was a Brick Township Native Americans were among the early summer residents who came to this area for the oysters, clams, fish, and the abundant wildlife in the woodlands. In their travels the Natives left a legacy of artifacts and names, Metedeconk, Manasquan, and Mantoloking. By the 1730’s they no longer visited this area as they began their move westward.

In 1850, when the New Jersey Legislature created Ocean County from parts of Monmouth and Burlington Counties, they also created Brick Township from parts of Dover and Howell Townships. The new Township was named Brick for its most prominent citizen Joseph W. Brick, the industrious and successful owner of Bergen Iron Works.

Early industries were the lumber, pinewood (charcoal and turpentine), iron industry (Butcher’s Forge at Forge Pond) Bergen Iron Works, Cranberry, Blueberry, and poultry. The resort industry always provided seasonal work for the locals. The people of Brick Township also made their living off the land, bay and rivers. They were subsistence farmers growing their own food and trading off the surplus. They fished and hunted the rivers, bay, ocean and forest. There was an abundance of striped bass, perch, herring, crabs and clams along with ducks, rabbits, pheasants and grouse. There were cranberry bogs in most sections of town and later blueberry growing became an important crop.

Compared to today’s schools early Brick Township schools were one or two room buildings, housing grades one through eight. The furnishings were basic, benches and desks, hooks on the wall for coats, a receptacle for water, (there was no running water) and a blackboard (chalkboard). In the middle of the room was an iron stove for heat and at the front of the room was a teacher’s desk

The 1900’s brought new economies to the area; the poultry industry started with Park & Tilford’s Laurelton Farms and peaked in the 1960’s. Summer camps for children began to spring up, Camp Eagle, Boy Scout’s Camp Burton, Princeton Summer Camp, Camp Metedeconk, New Jersey Episcopal Choir Camp (NEJECHO) and the Cedars. Land developers arrived promoting the area as a resort, for swimming, boating, salt water bathing, crabbing, fishing and for just getting away. In 1934, the Van Ness Corporation developed Breton Woods. Because of its many lagoons, Shore Acres was advertised as “The Venice of the Jersey Shore.” The Hudson Dispatch, a newspaper, offered a plot of land in Cedarwood Park with a subscription to their newspaper (a subscriber had to buy an additional lot at full price in order to build a house).

Brick Township continued to be a quiet rural-resort and commercial community into the 1950’s, until the Garden State Parkway opened. Travelers exiting the Parkway were soon to discover this area where property was inexpensive and taxes were low, was a place where they could go to move away from the crowded cities. Unrest in the urban areas in the 1960’s and 70’s caused a flight of families to the urban areas and Brick Township was the ideal place to relocate. As more and more people moved into Brick Township the general stores were replace by department stores, supermarkets, and specialty shops. Highways and roads were expanded as well as city services. Since 1850 Brick Township has evolved from the virgin woodlands to the thriving suburban community it is today. 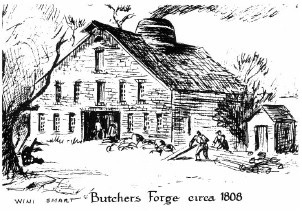 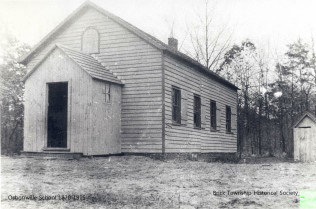 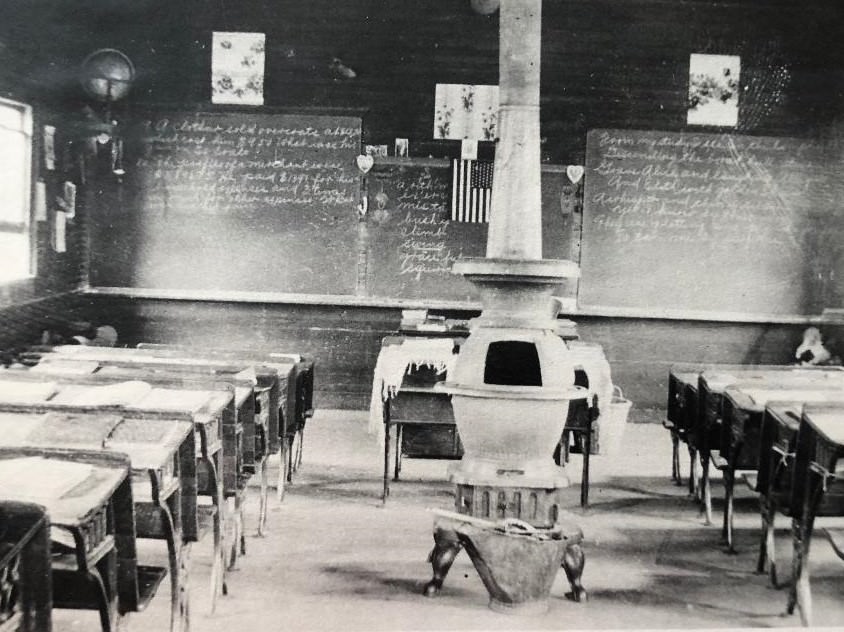 DENTISTS
There were no dentists in the shore counties in the first half of the 19th century. The barber or the blacksmith usually performed the necessary work of pulling teeth.
Source: Wilson, Harold F. The Jersey Shore. Lewis Historical Publications Co, Inc. 1953.

1920’s OKATONA:
In the 1920’s Harold C. Englert of Laurelton manufactured and sold a compound of vegetable and mineral ingredients. OKATONA was to be used as a laxative, stimulant and diuretic.

1912 LAURELTON
In 1912, the Park & Tilford Poultry Co. owners of Laurelton Farms did not like shipping their chickens and eggs from a placed called Burrsville and approached the local population, of which they employed about 100, to change the name of the village. The local population came up with Laurelton taking the name from the abundant Laurel in the area.
Source: Emma Havens Young interviewed by Myrtle Moore

1926 GODFREY MANOR COUNTRY CLUB
The rumor that there was oil under on old cranberry field in the Herbertsville section of Brick Township had been around for many years. In 1926, Chas. F and E.L. Godfrey principal owners of the Silverton Land Company purchased that cranberry field and the land around it to build their development Godfrey Manor Country Club. Eventually the Godfrey’s heard the rumor and brought in a derrick to drill for that oil. Drilling went on for several days, attracting hordes of people to gather and watch. They drilled and pumped out water, they drilled and pumped out water and finely they pumped out water. Source: Elmer Havens interviewed by Gene Donatiello

1880 ELECTION OF ABRAHAM CHARLES BARTALETTE HAVENS 1880
Burt Havens of Toms River recalled the election of 1880. “He was eight years old and his father Abraham C. B. Havens was elected State Senator from Ocean County” Abraham C.B. was teaching school in Burrsville (Laurelton) when he was named Republican nominee for Senator, (State) opposing Rufus Blodget, Democrat.”
Burt’s uncle John had sent his son, Abraham O.S. Havens to New York to get $2,000 in one and two dollar bills. The bills were scattered over the county. It was a common practice to do this in early days and Burt said the “oiling” was a wonderful and certainly productive as it helped the 84% majority. His father was elected by a 9 to 6 majority. For ten years, the Democrats had held a key position in Ocean County. This election broke up the Democrats.”
Source: Excerpted from The History of Brick Township by Eleanor Angott, Written for the New Jersey Tercentenary of 1964. Complied by the Ocean County Historical Society, 1992

SILVER HILL
According to Pete Tilton as reported in the New Jersey Courier, 1933. Silver Hill was in the Brushy Neck section Brick Township. “It was called Silver Hill because…folks at the time of the American Revolution buried their money in the ground to hide it from the British and the Pine Barron Robbers.

SLOP BRICK
Frank Herbert worked at the Tilton brickyard at age 14 in the village of Herbertsville. “I helped mold a kiln of 300,000 bricks standing on a soap box to do it. I should judge the kiln was about 60 feet long, 30 feet wide, and 16 feet high. They was what we call “slob brick“, the watery kind. We’d bring them out in molds that held six. We’d upset the molds on the floor and let the bricks get partially dry, then we’d edge them up and stack them in rows until they were perfectly dry, after which we’d bake them in the kiln. One kiln is about all we’d bake a year.”
Source: Slop brick according to B. Frank Herbert as reported in the New Jersey Courier, 1933

1938 FIRE RAZES SCHOOL AT OSBORNVILLE
Saturday Night Fire Is Termed Suspicious by Brick Officials Who are Investigating Several Other Fires In That Section
County and Brick Officials authorities are investigating two fires of suspicious origins which occurred on Saturday night one in an unoccupied bungalow at Adamston, the other at the Osbornville grade school. The latter place was razed to the ground despite the efforts of the Osbornville-Laurelton and Mantoloking fire companies. Members of the board of education place the loss at between $15,000 and $20,000.
Source: Lakewood Citizen January 14, 1938
“Rumor around town was that Osbornville School was burned by the PTA because they wanted a new school”

1875 HULSE FAMILY OF METEDECONK NECK
New Jersey Courier: August 12, 1875 – Two children of Aaron W. Hulse’s were paring potatoes under a tree when lightning struck killing the 7 year-old boy and injuring the 9 year-old girl.
At the time of the accident Aaron age 24 a fisherman and his wife Catherine also age 24 had four children, Margaret age 9 who was injured in the lightning strike. Amos age 7 who was killed in the lightning strike, Aaron A. age 3, and Catherine E. not yet one year old. A son Selah was born in 1877 and a daughter Lois L. born in 1887.
Aaron A. Hulse age 47, son of Aaron W. Hulse lived on Metedeconk Neck in the 1920’s with his wife Sarah age 42 and their two sons Forest and Leon, when according to the New Jersey Courier of April 26, 1926 a forest fire swept through the Adamston-Osbornville area, the fire destroyed several homes including the home of Aaron A. Hulse.
Sources: New Jersey Courier August 12, 1875, New Jersey Courier April 26, 1926, U. S. Census 1870.

1920’s LOCAL SPEAKEASY
Gladys Taylor’s four room house on Adamston Road had no electric and no indoor plumbing when she moved in in 1928. There also were two large fireplaces in each on the first floor rooms. The fireplaces were built in 1918 when the house served as the local speakeasy during the prohibition of alcoholic sales. Gladys raised and trained silver fox and German Shepards.
Gladys Taylor interviewed by Gene Donatiello, June 28, 1990.

BRUCE SPRINGSTEEN/BRICK TOWNSHIP CONNECTION
On May 18, 1966, Bruce Springsteen as a member of the teen-rock combo “The Castles” recorded two songs written by Mr. Springsteen, at the Mr. Music Studio, Inc. at 493 Brick Boulevard, Brick Township. Mr. Music was a privately-owned music store with two recording studios. The songs were “That’s What You Get” and “Baby I”.
Source:
The Bruce Springsteen Songbook
Mark Hagan, Head of Programming, VH1
©1966 Connoisseur Collection LTD 2/3 Fitzroy Mews, London

Paupers: Individual citizens were paid by the Township Committee for housing paupers as in the case of Catharine Herbert of Herbertsville who was paid $50.75 for boarding George D Martin from December 1. 1889 to June 28, 1890. That amounted $1.75 per week.